Cup / League Round Up 7th April 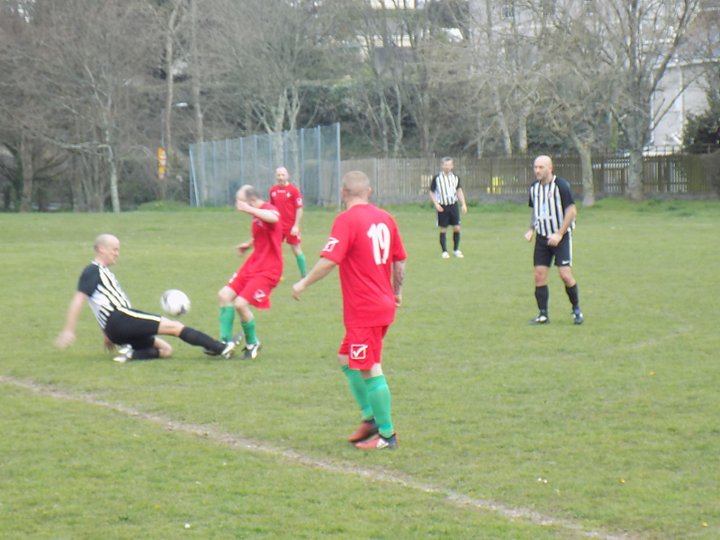 The remaining Supplementary Cup Semi Final was settled at the Ginsters Marshfield Park where visiting Kernow Wanderers put up a brave fight, but were beaten 3-0 by their hosts, Callington Town.

The result of the day saw Bude Town overcome the recently crowned Division One champions, Perranporth in the Knockout Cup Semi Final. Patrick Hawkins and Mark McManus both netted twice in a seven goal thriller to overcome their visitors 4-3 to secure Bude’s second cup final in as many seasons. 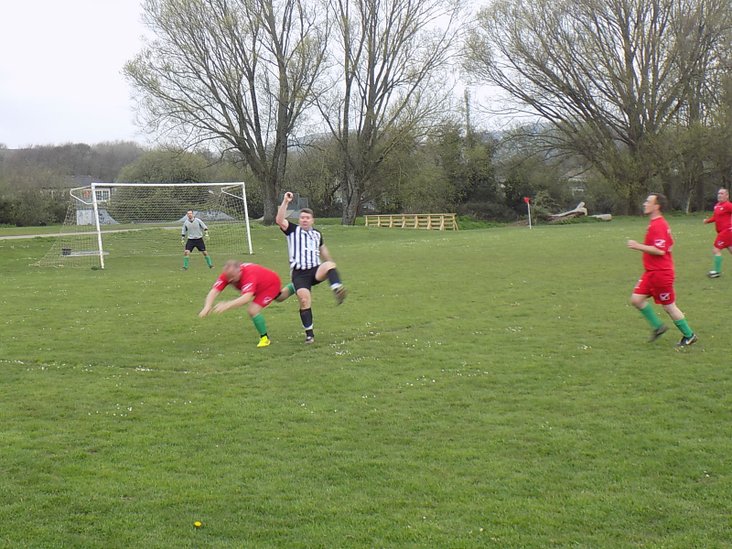 The other KO Cup Semi Final was an entertaining encounter at Par Track. In a game that had absolutely everything visiting Millbrook progressed to their second veterans’ cup final of the season at the expense of home side Royal Par. Having already secured their place in the League Cup Final, Millbrook started strongly and were ahead on the quarter hour mark. With Brian Stacey through on goal, ‘keeper Rob Cock pulled down the striker as he rounded him. As last man Cock was perhaps a little fortunate to escape with a yellow card, but could do nothing as the prolific Stacey drilled the resultant penalty into the bottom corner. A few minutes later the visitors came close the doubling their lead, but Paul Morgan cleared off the line, although Millbrook felt he did so with his hands. Gradually Royal Par came more into the game and got themselves on level terms on 34 minutes. Kev Allen’s tame shot was fumbled by ‘keeper Gary Metters and Kev Rowden was on hand to prod home at close range. The second period started in similar fashion with the visitors on the front foot. In the first minute a Stacey cross was headed over by Matthew Williams. Again Royal refused to roll over and a spot of pinball in the Millbrook box could have ended up anywhere. On 69 minutes the visitors were awarded a second spot kick when Stacey was again impeded in the box. This time the league’s top scorer failed to convert as ‘keeper Cock made a fine save to his left. Two minutes later though, the hosts were behind for the second time in the match. Danny Medlin’s headed effort from a corner was deemed to have crossed the line by the Assistant Referee. Soon after Cock denied Stacey with a sharp save, but was powerless to prevent ‘Brook extending the lead when Jonathan Pidgen ran through on goal and curled his shot into the corner to secure the victory. There was still time for a late red card. As frustration mounted for Royal, Colin Harker was given his marching orders for an off the ball incident.

Away from the cup action there was one league game. In Division One Downderry Rovers secured runners up spot with a 2-1 home success over St Agnes Bolsters. On target for Rovers were Dave Brown and Neil Mullis with Bolsters consolation coming from an own goal. All the goals coming in the first half.

FA Peoples Cup Regional Finals  Rovers do themselves proud, but bow out of the tournament