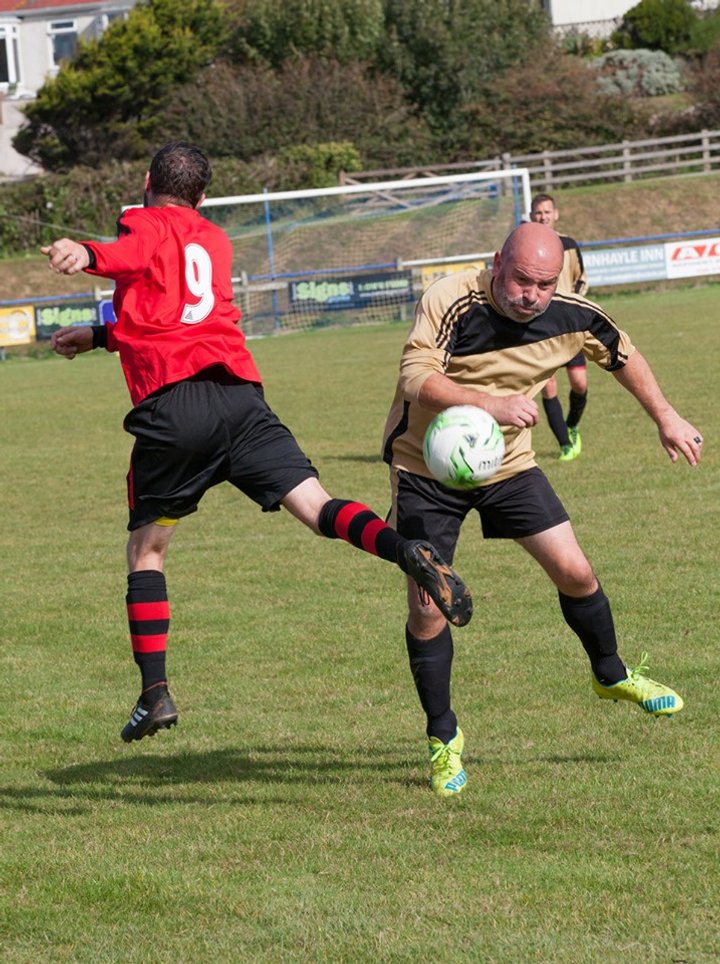 Lots of games, lots of goals, lots of drama in the Cups and Division 1

Cornwall’s Veterans footballers were in action at the weekend competing on three fronts with games in the League Cup, Knockout Cup and Division 1.

Brand new to Vets football, Troon are dipping their toe into the scene by just entering the cup competitions for the forthcoming season. They hosted seasoned campaigners Downderry Rovers in the Knockout Cup Preliminary Round at Grouter Park and a first half goal by Russell Hargreaves gave the home side the advantage. In an evenly contested contest it was looking like the hosts were to enjoy a dream start, but Rovers’ Colin Wilson hadn’t read the script and equalized in the dying moments. With no extra time the tie was decided by the lottery of penalty kicks. Rovers made the most of their lifeline to succeed 4-3 in the shoot out.

Also playing their first game, Redruth United were in action in the same competition travelling to face Kernow Wanderers. Two goals in each half gave United a dream start with Nigel Martyn hitting a hat trick and Ian Jenkin completing the scoring.

The other preliminary round tie in the KO Cup saw Division 2 side St Agnes Bolsters host Callington Town of Division 1. In a games that looked like one goal would decide the tie, an own goal by Bolsters Dan O’Toole in the 55th minute saw Callington through to make the long trip worthwhile. Despite the lack of goals both teams created quite a few chances each but in general each team were solid in defence helped by some decent goalkeeping.

The League Cup also staged a preliminary round involving six teams. Last season’s beaten finalists, Millbrook travelled to Indian Queens to face newly formed Clays Veterans. The hosts were put to the sword by a rampant ‘Brook who stormed into an 8-0 half time lead. The second period wasn’t quite such a goal fest, but the visitors still added a couple to their tally to take their score to double figures without reply. Brett Shannon and Nick Mann both bagged hat tricks, with Andrew Carter, John Pidgen, Brian Stacey and James Carhart weighing in with the other goals.

Halsetown got themselves in the hat for the next round despite conceding two own goals at Grampound. The first after five minutes to give the home side the lead. Despite creating several chances the hosts were unable to add to their early lead. They were made to pay when a fine cross was met at the far post and headed home to equalize. The hosts continued to dominate, but couldn’t turn the pressure into goals. Caught on the break from their own corner Grampound then found themselves behind at the break by two goals to one. Another own goal early in the second period restored parity. However, the home side lost a bit of momentum in the latter stages and Halsetown took full advantage scoring two further goals to wrap up a 4-2 win. The unfortunate ‘town players to put into their own net were Jon Binney and Alex Bonner, although Bonner later made amends scoring at the right end. Also on target for the visitors were Nick Walker (2) and Leigh Murray.

The remaining tie took place on Monday evening under the lights of Mount Wise where home side Newquay took on Helston Athletic. Both sides have entered the league this season and are highly fancied to do well in Division 2. A well contested game saw the home side come out 2-0 victors although that didn’t tell the whole story, with Helston missing a penalty in the first half. Lee Paxton and Grant Russell bagged the goals for Newquay who also missed a penalty of their own in the second half.

A couple of league games took place in Division 1. Royal Par welcomed current champions Perranporth to Par Running Track. Long range strikes from Mariusz Janasiak and Alaa Siam saw the hosts storm into a two goal lead. A contentious penalty converted by Steve Warr saw the deficit reduced to 2-1 at the break. Janasiak hit another goal from distance to restore Royal’s two goal cushion and when Chris Mather headed home a Colin Harker flick on from a corner the game was as good as over for the defending champions. The final whistle came some ten minutes early after a nasty head injury to Siam caused a long delay. With the Perranporth players having to travel back due to other commitments the referee had no option but to blow up early.

Foxhole picked up their first win of the campaign after a hard fought game against visiting Bude Town. All the goals came in a lively first half, the Foxes showing first inside the opening minute when Kev Grainger slotted home. Ten minutes into the match the home side were caught out from a short corner when Mark McManus cut in from the left and smashed a shot home. Bude got their noses ahead on 24 minutes when Phil Walmsley forced the ball home from close range. In a ding dong half, the home side drew level on 35 minutes when Martin Gilbert fired home a half volley from 20 yards. Two minutes later Foxhole were back in front. Midfielder Gary Heale tucking the ball away at the second attempt. And five minutes before half time Gareth Masters was on hand to stretch the Foxes lead at half time to 4-2 after good work by Wayne Hoole. After the fireworks of the first half it was little surprise the second period was a calmer affair. With both sides cancelling each other out neither side were able to add to the scoring. Ali Milton came close for the hosts when his free kick struck the post.

Following the game at Foxhole the draw was made for the next rounds of the cups. Draws were as follows: -

 6th October Round Up Latest action in the Cornwall Veterans League

Round Up 8th Sept  First games of the new season